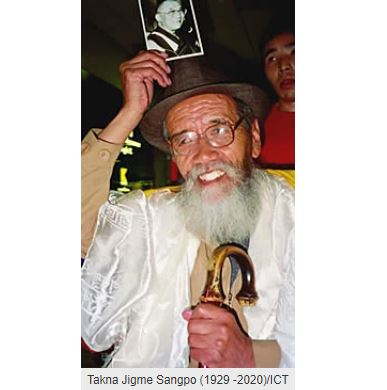 Dharamshala: Tributes poured in from around the world on Saturday as word spread that the former Tibetan political prisoner who spent almost half his life in Chinese prison and had spent the remaining in exile relentlessly advocating of the Tibetan cause had died at the age of 91.

Takna Jigme Sangpo, Tibet’s longest political prisoner passed away earlier this morning at an elderly care home in Turbenthal, Switzerland, where he had been based since receiving political asylum in 2003, a year after he completed 37-year sentence in Chinese prison.

President Dr Lobsang Sangay of the Central Tibetan Administration expressed profound condolences at the demise, saying, “I have been an admirer of his courage since my youth days. It was an honour meeting him in person and I also took part in the launch of his autobiography in Dharamshala. We have lost a true patriot of Tibet.”

Having spent 37 years in Chinese prison, Takna Jigme Sangpo was the longest-serving Tibetan political prisoner. He was reportedly first arrested in 1960 while teaching at Lhasa Primary School and charged with “corrupting the minds of children with reactionary ideas”. In 1964 he was sentenced to three years’ imprisonment in Sangyip Prison over comments regarding Chinese repression of Tibetans and was sent to labour camp in Lhasa. He was again sentenced to ten years’ imprisonment in Sangyip Prison for ‘counter-revolutionary’ propaganda in 1970. He had been caught attempting to send a document reporting Chinese atrocities to His Holiness the Dalai Lama via his niece, who was trying to flee Tibet.

At the age of 53, Takna Jigme Sangpo was released from prison in 1979 and transferred to the ‘Reform-Through-Labor’ Unit 1 in Nyethang, west of Lhasa, but he was arrested again on September 3, 1983, by the Lhasa City Public Security Bureau for pasting a ‘personally written’ wall-poster protesting against Chinese authority on the main gate of the Jokhang Temple in Lhasa.

On 6 December 1991, Takna Jigme made another bold attempt at an individual protest. During an official visit by a Swiss delegation, Jigme shouted “Free Tibet” in English, a phrase he had specially learnt for the occasion, and slogans in Chinese and Tibetan, from his cell. The authorities tried to explain away the incident by claiming to the delegates that he was ‘mad’.

Takna Jigme was subsequently sentenced on 4 April 1992 to a further eight years imprisonment, and an additional three years deprivation of civil and political rights, bringing his sentence to 28 years and by his release on 3 September 2011, he would have spent 41 years in prison.

He lost his eyesight as a result of suffering forced labour, prison atrocities and harsh prison conditions. “Torture and degrading ill-treatment, inhuman interrogation, solitary confinement, forced labour and indoctrination sessions are common practices used by the Chinese authorities in Tibet’s prisons,” he testified in 2003.

As a result of sustained efforts by the Central Tibetan Administration and international community pressing the Chinese government for his release, Takna Jigme was released on medical parole at the age of 76 in March 2002.

Thirty-seven years behind bars had not deterred the spirit of Takna Jigme Sangpo. In August 2002, he settled in Switzerland as a political refugee and relentlessly advocated for the issue of Tibet and testified at various human rights forums on the gross violations of human rights in Chinese-occupied Tibet. In April 2003, he first testified at the UN Commission on Human Rights, in which he said: “this old man from Tibet, appeals to all nations in this hall to help end the human suffering of the Tibetans. Please urge the Chinese government to open earnest negotiations with His Holiness the Dalai Lama to resolve the long-standing Tibetan Issue in the interest of both the Tibetan and Chinese peoples. The unfortunate people of Tibet, including the political prisoners, who are the same human being as everyone else in this hall, urgently need your support before it is too late…I pray for an end to the suffering of all political prisoners in this world”. On 6 June 2008, he addressed the UN Council. Takna Jigme Sangpo’s biography titled ‘Metse Nyongtsor’ was released on 24 January 2014 in Dharamshala by Sikyong Dr Lobsang Sangay and was published by Gu Chu Sum Movement of Tibet.