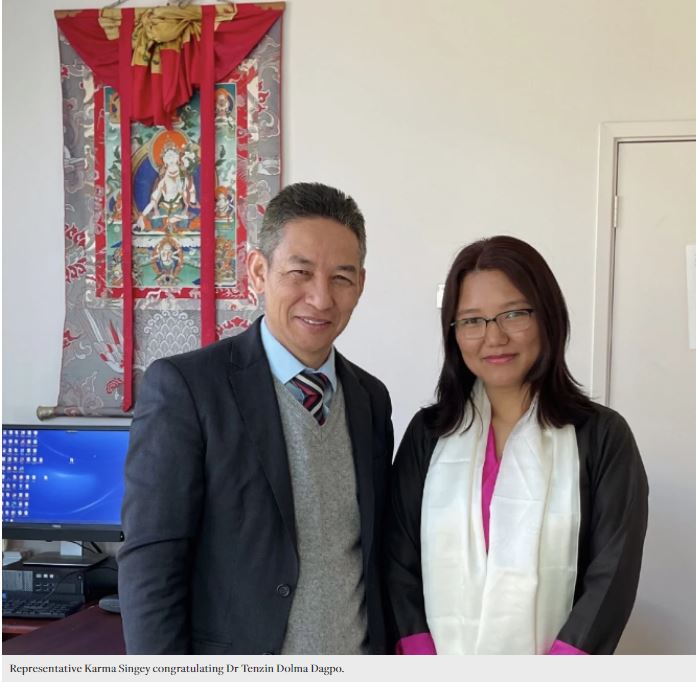 Canberra: The Tibet Information Office, Canberra, extends its heartiest congratulations to Dr Tenzin Dolma Dagpo on successfully completing her PhD in Medical Science from the Australian National University (ANU). She is the first Tibetan woman to receive a science research doctorate degree in Australia.

Congratulating her on her achievement, Representative Karma Singey said, “It is a matter of pride for us to see your outstanding achievement and setting an exemplary role model for other Tibetan students studying in various colleges and universities in Australia.” He further wished her good luck in all her future endeavours and encouraged her to continue to remain a contributing member of the Tibetan community in Australia and to serve the Tibetan cause.

Tenzin completed her schooling at Tibetan Children’s Village (TCV), Dharamsala as the TCV science topper. She then received a scholarship to graduate with a BSc in Biomedical Science with first-class honours from the London Metropolitan University, UK, where she was also awarded the Biomedical graduate of the year award by the Institute of Biomedical Science (IBMS), UK. She later moved to Australia for her postgraduate studies, receiving her MSc in Biotechnology with Distinction at ANU, and further completed a Master of Philosophy (MPhil) in research, focusing on obesity and non-alcoholic steatohepatitis. She was awarded the Australian government research training program (AGRTP) scholarship to pursue a PhD in the Endocrinology and Diabetes Laboratory of Prof. Christopher Nolan at ANU. Her PhD thesis was on the genetics of diabetes, particularly focusing on the genetic factors associated with the clinical convergence of Type 1 and Type 2 diabetes.

She attributes her achievements to His Holiness The Dalai Lama, who has always emphasized the importance of education and encouraged Tibetan students to specialize and pursue further studies in their fields of interest.

Tenzin has also previously served as the General Secretary of ACT Tibetan Community in Canberra and has been continually involved with the community’s cultural and advocacy events.