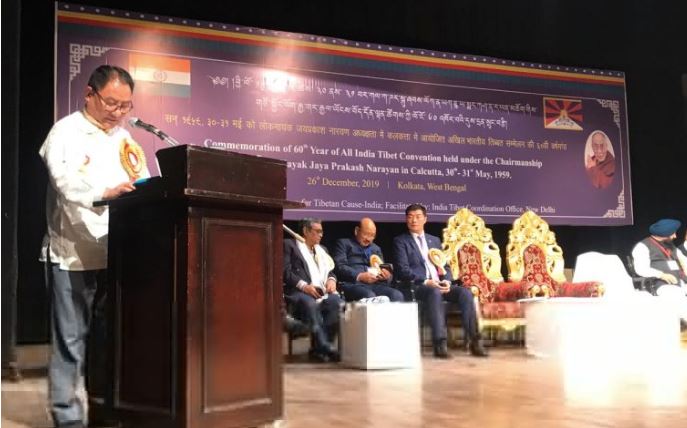 It is with great joy and honour to be part of this special program of the Commemoration of the 60th Year of All India Tibet Convention. With utmost gratitude to the people of India and especially to the Members of Core Group for Tibetan Cause, I, on behalf of all Tibetans in and outside Tibet and Tibetan Parliament-in-Exile, would like to offer my highest felicitation to all of you for your unceasing support towards the just cause of Tibet. We Tibetans are truly privileged to have a reliable and genuine support system from brothers and sisters of our second home and your unwavering determination and dedication made our issue still alive even after 60 years of exile.

Core Group for Tibetan Cause is a voluntary organisation in India that evolved in 2002, with the prime motive of supporting the cause of Tibet and creating awareness to the people of India and worldwide. It is the apex coordinating body of all the Tibet Support Groups in India. It coordinates, directs, plans and initiates activities in support of the cause of Tibet and Tibetans in India.  This organisation has branches in different parts of India – Northern, Eastern, Western, Southern, North East, West Central, Delhi and organizes rallies, conferences, seminars, campaigns, peace marches and many activities which are indeed noteworthy and we are extremely thankful for these untiring support. Your support sends a message to the world that the issue of Tibet is not only alive but is critical and urgent and needs the support of the world to resolve during the lifetime of His Holiness the 14th Dalai Lama. Advocating our cause signals the testimony of supporting for truth and justice.

Besides that, I truly appreciate Core Group for holding such a significant program – Commemoration of the 60th Year of All India Tibet Convention with the sole purpose to pay the highest tribute to the personalities and individuals who have dedicated their lives for the cause of Tibet.

All India Tibet Convention was held right after the arrival of His Holiness the 14th Dalai Lama in exile India. It was held in Kolkata (before it is Calcutta) from 30th to 31st May 1959 under the leadership of legendary socialist late Shri. Jayprakash Narayan Ji.

Revered late Shri. Jayprakash Narayan ji (JP Narayan) was an Indian independence activist, theorist, socialist and political leader. He was a recipient of the Bharat Ratna Award, India’s highest civilian award in recognition of his social work. He was one of the prominent personnel of India who has voiced for the issue of Tibet right from the time when the People’s Republic of China (PRC) started invading Tibet from the early 1950s. He was the one who desperately voiced about the illegitimate occupation of PRC on Tibet by saying “The situation in Tibet must cause serious anxiety to all the peoples of Asia, particularly to us in India“. Furthermore, he strongly stated that Tibet was not a part of China and he didn’t want India to go for a war with China on behalf of Tibet but want India to be true to what’s going on with its neighbouring country, Tibet, that was illegally controlled by China. This aggressive occupation of Tibet by the Chinese Communist had taken many innocent lives of Tibetans who fought against them and this tragic event must be brought front to the world and thereby call upon the United Nations to take action against powerful Communist China. He told, “every freedom-loving individual should be ready to call a spade a spade” and thus “we at least can put on record our clear verdict that aggression has been committed and freedom of a weak nation has been snuffed out by a powerful neighbour. Let us too not waver to tear the veil from the face of communism“. Likewise, he expressed that Tibet may be a backward country economically and socially but no country has the right to impose progress on other nations. Every nation has the fundamental right to choose its own way of life. Thus it is the moral responsibility of every nation, especially India to stand in support towards a weaker nation that has been gobbled up by a powerful nation so that in future, brutality and aggression do not become the trend of the world. The sheer determination and loyalty of late Shri. JP Narayan Ji with the summon of All India Tibet Convention in Kolkata had led to the formation of innumerable support groups in India today who are untiringly carrying activities in support of the just cause of Tibet.

The resolution of Kolkata Convention of 1959 sympathizes with Tibetans who had gone through tremendous tragedy and tribulations under the aggressive Communist China and clearly stated that the so-called 17 Point Agreement between China and Tibet was signed under coercion and pressure from Communist China which led to the forceful exodus of His Holiness the 14th Dalai Lama along with around 80000 Tibetans to India. It appreciated the initiative of the government of India in providing political asylum to His Holiness the Dalai Lama and thousands of Tibetans to India. The Kolkata Convention empowered late Shri. J.P. Narayan Ji, the President of the Convention to set an Afro-Asian Committee on Tibet with a view, among other things;

“(1) to mobilise world opinion particularly in Asian and African countries;
(2) to arrange for the appointment of an International Commission of neutral countries with a view to reporting on the alleged violation of the human rights including the destruction of monasteries in Tibet.”

Through this Afro-Asian Committee on Tibet, along with late Shri. J.P. Narayan Ji, Shri. H.R. Patiala Ji and Shri. Song Raghu Ji was assigned to carry forward the issue of Tibet on international platforms and to garner more supports for Tibetans and its cause. In April 1960 in New Delhi, a Convention was held by the respected late Shri. JP Narayan Ji where it declared to the world about the critical happenings inside Tibet and through this convention, Afro-Asian Council was established. This council had sent its representatives to New York to support the Tibetan appeal in the World Assembly in 1960. We are indeed very thankful to late Shri. JP Narayan Ji for his sincere, wholehearted, dedication and loyalty towards the just cause of Tibet and we are blessed to have a true friend like late Shri. JP Narayan Ji.

With the blessings and the remarkable visions of the above mentioned distinguish leaders and all our trusted Indian friends continue to support more vigorously towards resolving Tibet’s issue to this day. Tibetan struggle has come through a long way with more vigour, commitment, more wisdom and more resilience with your support against one of the most powerful countries in the world. Within these sixty long years, without the persistence support of all our Indian friends, our issue will not reach its height on the international platform nor would it have remained alive. We are genuinely grateful to the people of India who have helped and supported us during our darkest hours by providing political refuge to us to stay in India with full freedom to preserve our own Tibetan language, religion, and culture. India is our second home and we feel safely guarded by the government of India. The older Tibetans and the new generations will forever remain indebted to the people and the government of India.

From the 1970s onward, Tibetans have adopted the Middle Way Approach, under the great vision of His Holiness the 14th Dalai Lama. His Holiness the 14th Dalai Lama and Central Tibetan Administration are very committed to solving the issue of Tibet through peaceful dialogue with the Chinese government. We genuinely accept the Middle Way Approach of staying alongside Chinese people for the interest of both the people of Tibet and China. This approach, which you are supporting and are continuously recalling the Chinese government to indulge in the dialogue process with the Representative of His Holiness 14th Dalai Lama or Central Tibetan Administration is the most sensible approach for both Tibetans and Chinese people as well as to the people of the world.

Your active participation in this conference clearly confirms your firm commitment to support our long-lasting issue until it is resolved. We are truly indebted to you all and request to continue your support more than before. I want to thank all of you for coming all the way to Kolkata and to our long-time friend and National Convener of Core Group Shri. Rinchen Khandu Khrimey ji and his team for organizing this important event at this crucial time of Tibet’s history.