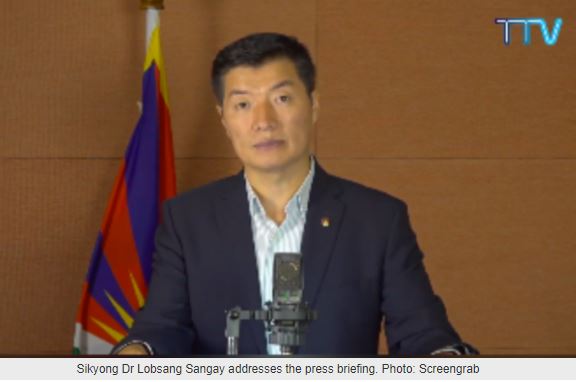 Dharamshala: Sikyong Dr Lobsang Sangay of the Central Tibetan Administration addressed a press briefing on the recent cases of COVID-19 reported from a local bank in the CTA premises where two bank staff tested positive for COVID-19.

No sooner the case was reported that CTA immediately began with contact tracing and announced a complete lockdown of the offices.

In the meanwhile, 41 CTA staff (total 46 tested, including 5 non-CTA from quarantine centres) who have visited the bank on 11 September or come in contact with the COVID positive case were tested and they were found to be negative, said Sikyong Dr Sangay, and added that results of 16 more staff are to be expected soon.

Sikyong asked the staff to strictly adhere to all the guidelines set by the administration.

In the same vein, he also alerted the Tibetan people against a much bigger threat, indicating the alleged interference by the Chinese government-linked hackers targeting the upcoming general election. He cited the recent case of Indian journalist Rajeev Sharma who was arrested on charges of spying and passing sensitive information to the Chinese government. The said journalist has also reportedly circulated fake news on His Holiness’ health and matters concerning the reincarnation.

“The upcoming general election is likely to have interferences and disruptions from certain Chinese planted spies in the community but we must remain alert and ensure peaceful and transparent elections’ concluded Sikyong.