His Holiness the Dalai Lama concludes Manjushri Cycle of Teachings Bodhgaya: Wrapping up on the final day of the teachings of the Manjhushir cycle, His Holiness the Dalai Lama gave the final permissions from the Manjushri Cycle of Teachings and also gave a reading of Jé Rinpoché’s ‘Three Principal Aspects of the Path’.

His Holiness declared his satisfaction that the series of teachings had been successfully completed. He noted that both those present with him in Bodhgaya and those attending to the teachings online had collected great merit. He recommended saying a prayer of general dedication, but also to make a dedication for the welfare of Tibet.

“Integrate the teachings within yourself and gradually transform your mind. This is the way to make your life meaningful,” His Holiness said to the devotees. “Things are impermanent. After being together it’s in the nature of things that we disperse. I won’t forget you. I’ll think of you. You, in turn, don’t just think of our having been here physically together, think of my having given teachings, they are the basis for transforming yourselves. Nevertheless, you also need to be practical and remember that transformation doesn’t take place instantly. It takes time —weeks, months and years of practice. Keep this in mind and practise well.”

He said the permissions was giving belong to Highest Yoga Tantra. They came about because the Buddha gave different teachings to different individuals and groups of people because of their differing mental dispositions,” His Holiness said. 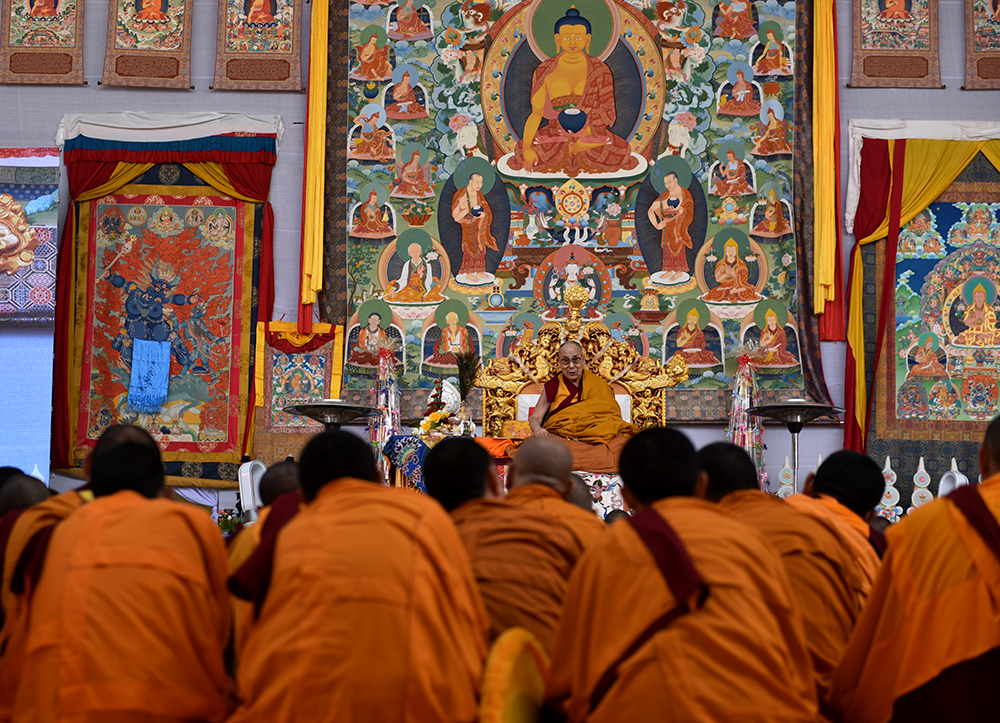 His Holiness the Dalai Lama on the final day of the teachings at the Kalachakra Ground in Bodhgaya, Bihar, India on January 6, 2020. Photo/Pasang Dhondup/CTA

“After the Buddha, great teachers like Nagarjuna and his followers had visions that gave rise to different traditions. Later, Naropa, who was once a scholarly gate-keeper at Nalanda University, left that role and entered into the life of a wandering yogin. He faced all kinds of difficulties but also received profound instructions from Tilopa. There are some practices intended to be deployed to overcome obstacles and foes, of which this practice of fierce Dharmaraja is one.”

“I’ve done the preparations and, before that this morning, I met some Chinese devotees. I pointed out to them that Buddhism in China as well as in Tibet originated here in India. These days, China has the largest Buddhist population in the world.”

As His Holiness read Jé Rinpoché’s ‘Three Principal Aspects of the Path’, His Holiness expressed his admiration for Tsongkhapa’s written works. 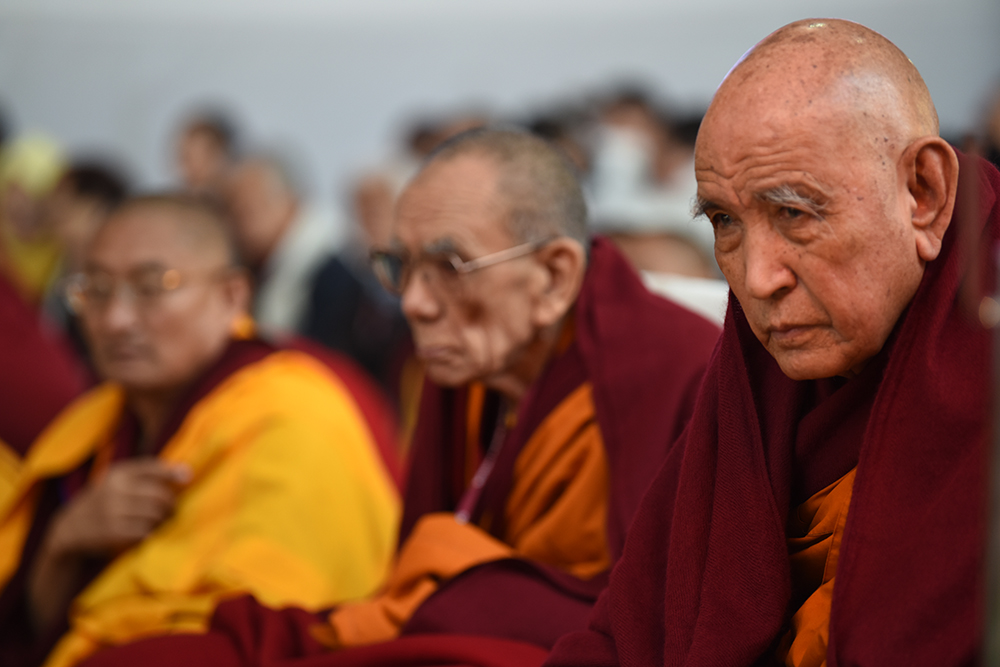 Heads of the various Buddhist traditions including Gaden Tripa at His Holiness’ teachings. Photo/Pasang Dhondup/CTa

“We are facing great problems in the world today. There’s too much violence and killing. The climate crisis is becoming extreme. Fires that have swept across Australia and parts of Brazil have left great numbers of animals dead. On an individual level we can take steps to counter global heating,” His Holiness remarked.

As he led the gathering in taking the bodhisattva vows once more, His Holiness pointed out that cultivating bodhichitta is the essence of the Buddha’s teaching. While giving the permissions, he elaborated on this, advising his listeners to cultivate bodhichitta as well as a clear understanding of emptiness and to do deity yoga. He remarked that if you can take the three bodies into the path, you’ll be prepared to take advantage of the mind of clear light that manifests at the time of death.

Finally, before His Holiness left the teaching ground a representative of the Teaching Organizing Committee and the Great Prayer Festival Committee each read out a statement of accounts. His Holiness waved goodbye to the crowd from the edge of the stage and even as he climbed into his car waved to more people who caught his eye. And with that he returned to Ganden Phelgyeling Monastery. 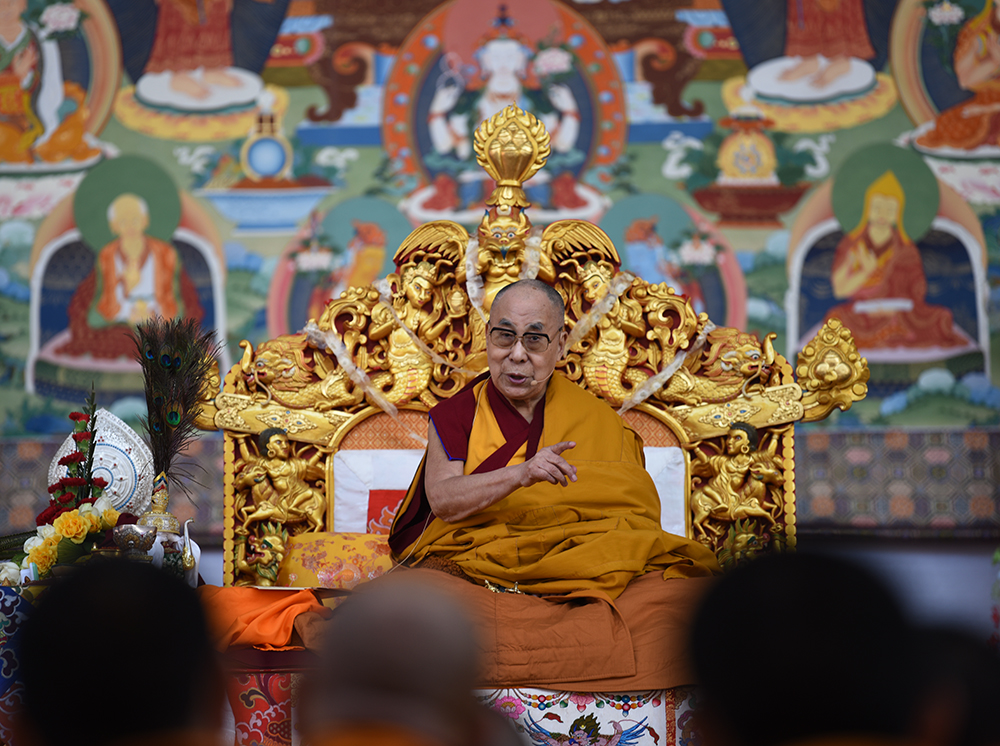 His Holiness the Dalai Lama speaking on the final day of the teachings at the Kalachakra Ground in Bodhgaya, Bihar, India on January 6, 2020. Photo/Pasang Dhondup/CTA