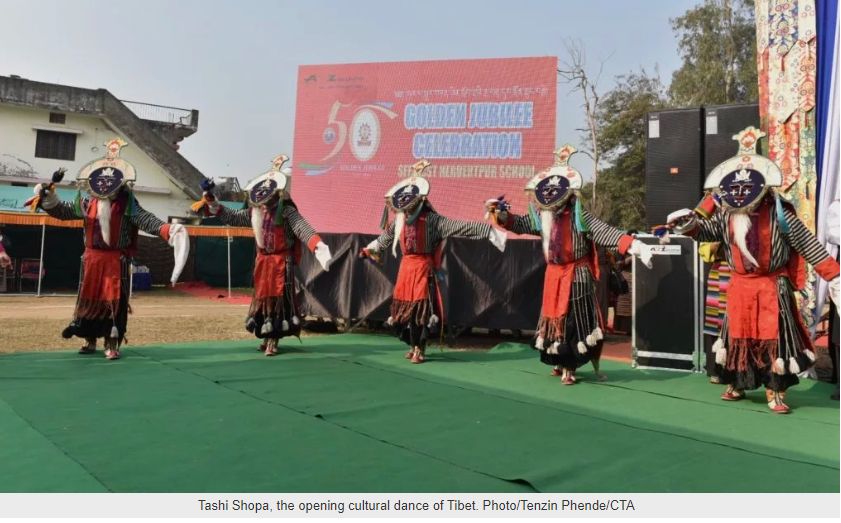 The school was initially established as Special Frontier Force Children’s school in 1970 in Chakrata but was gradually upgraded to high secondary and senior secondary level in 1986. SFF is a paramilitary special force of India created in 1962 with the recruitment of Tibetans. It is also known by ‘Establishment no 22’. SFF/CST has grown leaps and bounds and today it occupies the place of pride among the exile Tibetan community.

Among the guests, the presence of high dignitaries of CTA  including its President Dr Lobsang Sangay, Speaker Pema Jungney of the Tibetan Parliament in Exile, Chief Justice Commissioner Sonam N Dagpo, and Kalons added the warmth and gaiety of the festive occasion.

The congratulatory message from the Tibetan spiritual leader His Holiness the Dalai Lama besides a lofty display of marchpast by the current and former students of the school and the commemoration song gave a befitting grandeur to the occasion.

Mr Lobsang Yeshi, former president of the organising committee and alumni association kick-started the celebration with a welcome address. A tribute of gratitude was paid to His Holiness the Dalai Lama and his vision in establishing a school system for Tibetan refugees in India that combined modern education with Tibetan cultural heritage. Likewise, the Govt. of India was thanked equally for their generosity in sharing their ‘ancient wisdom’ and ‘their land’.

He acknowledged the defining role of the school in the formation of alumni who have made a mark in different fields and contributed to the community as well.

The principal of the school, Mr A.P Singh in his address emphasised the school’s ‘commitment to value-based quality education’ citing that students here are nurtured through love and care by the veteran teaching fraternity enabling them with ample opportunity to realise their full potential. He also highlighted the school’s commitment to combining the values inherent in Tibetan culture allied with the needs of the modern world.

Speaker of Tibetan parliament, Pema Jungney in his address acknowledged the kindness of the former teachers and noted that their tireless efforts have paid off in the form of a good number of well-qualified public service officials, educators, and medics etc.

He spoke in length about the necessity of value education for students, by pointing to the endless war happening across different parts of the world which he explained, were a result of the ‘self vs other’ binary approach. He emphasised the need for young Tibetans to understand the Buddhist teachings inherited from ancient Indian Nalanda tradition.

“It is paramount that young Tibetans study it thoroughly and implement it in life and further benefit all of mankind” he added. 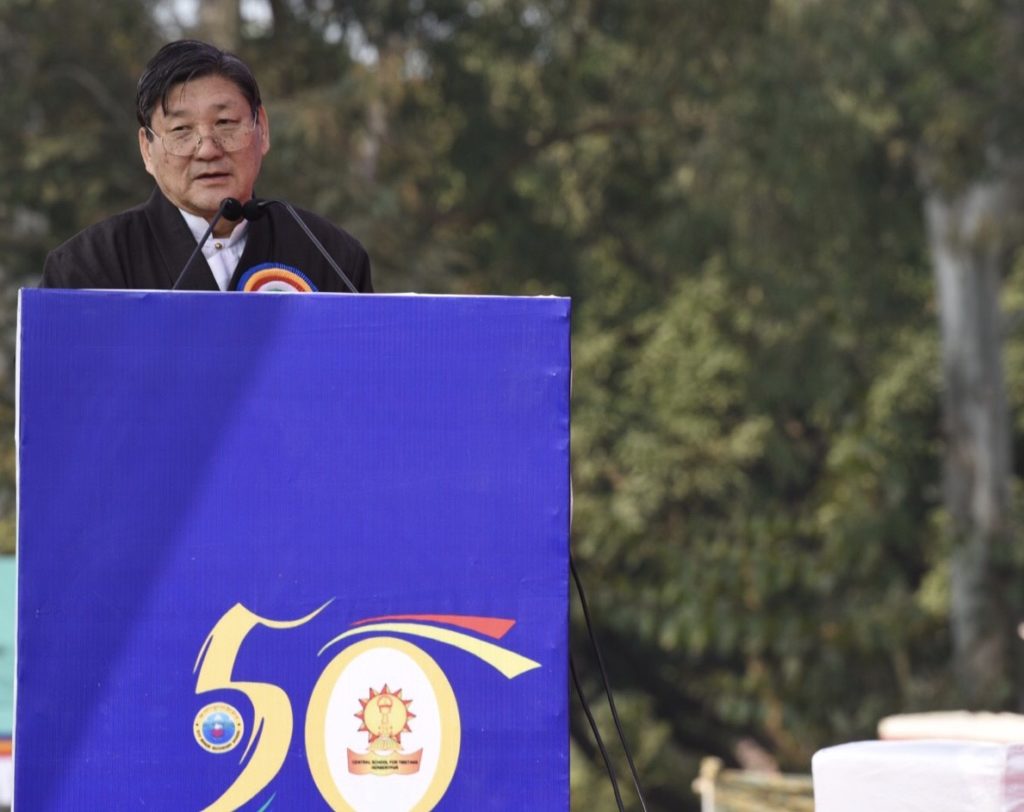 Chief Justice Commissioner Sonam Dagpo who is also a former teacher at the school attributed the day’s significance to those who initiated the school and above all His Holiness the Dalai Lama for the blessings and guidance. While he appreciated the level of success the school has accomplished he established that the students must strive to be a good and compassionate human being first.

Sh. Ashish Ahuja Commandant, Est. 22 spoke on the contribution of SFF to the school’s amenities particularly the sustenance of the school’s hostel. He assured the continuous support of SFF.

Lastly, Chief Guest Sikyong Dr Lobsang Sangay addressed the gathering. He attributed the success of the school to the pioneer figures and former teachers who have served CST Herbertpur in its initial years. He lauded the efforts of the school faculty members for providing sound education and guidance to students while acknowledging that many of those students are now serving prominent offices in the Tibetan community and worldwide.

Sikyong also paid tribute to His Holiness and said, ” Under the leadership and the efficient administration of the CTA, the Tibetan community is recognised as the most successful refugee community”. He equally attributed the success of the Tibetan community in exile to the Govt. of India and reckoned that no country has ever done more for Tibet than the Indian government.

While the alumni rejoiced in this renewed joy and nostalgic moment, the day’s jubilant celebration finally came to an end invoking a revived energy within every member of the alma mater. 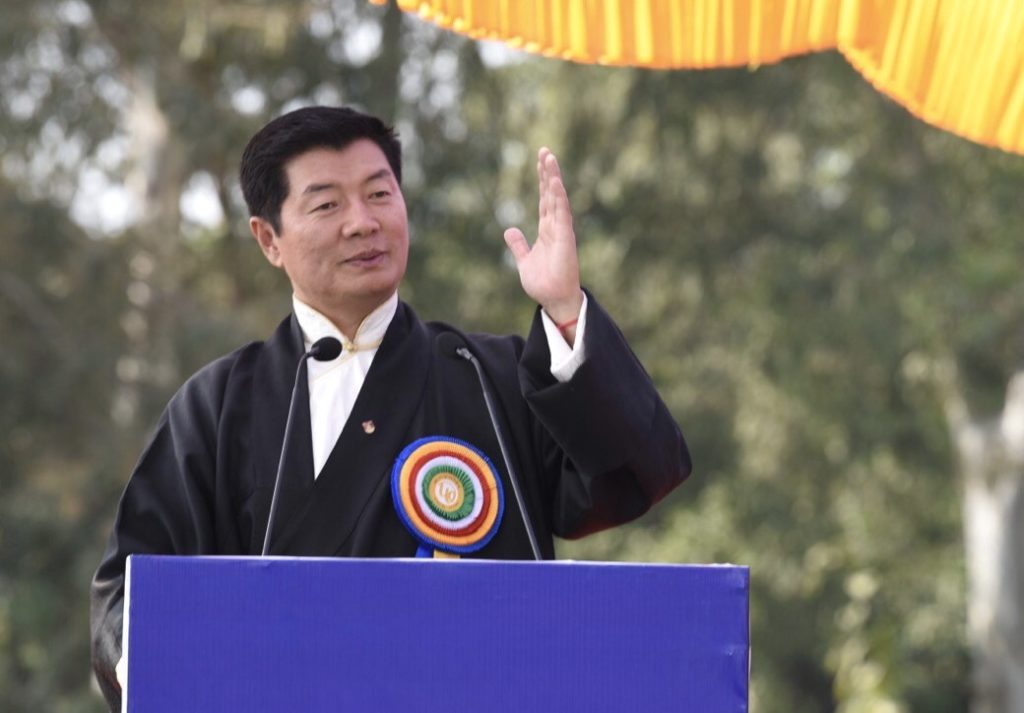 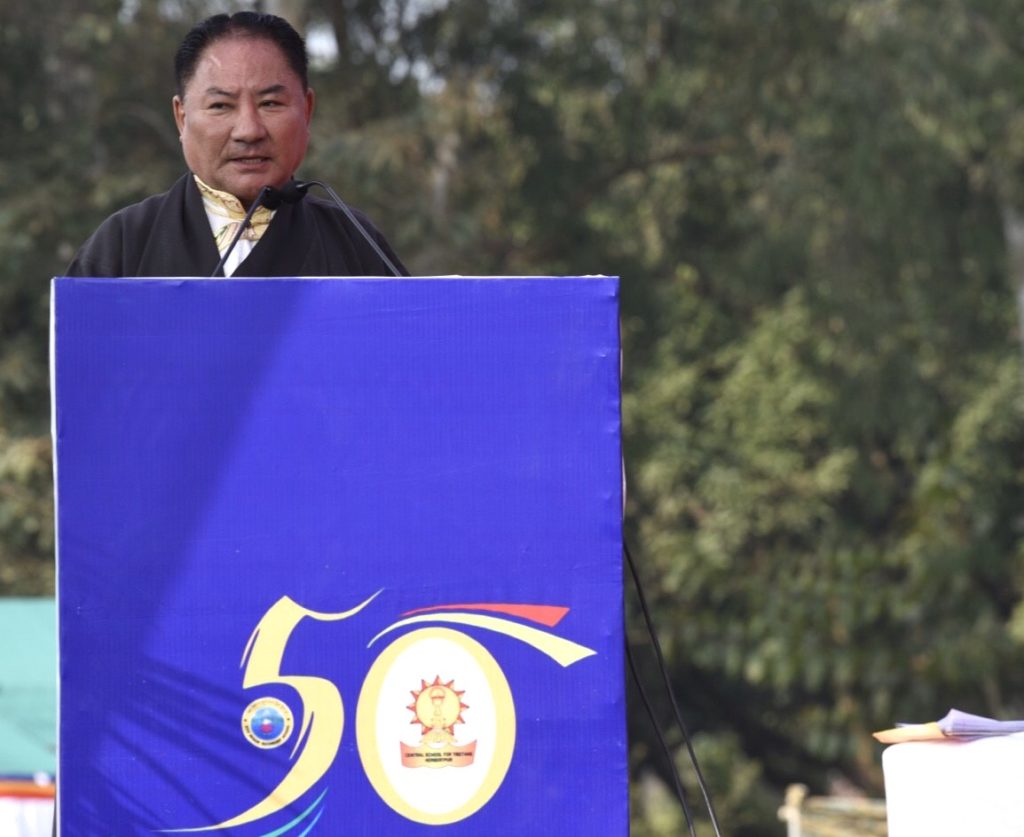 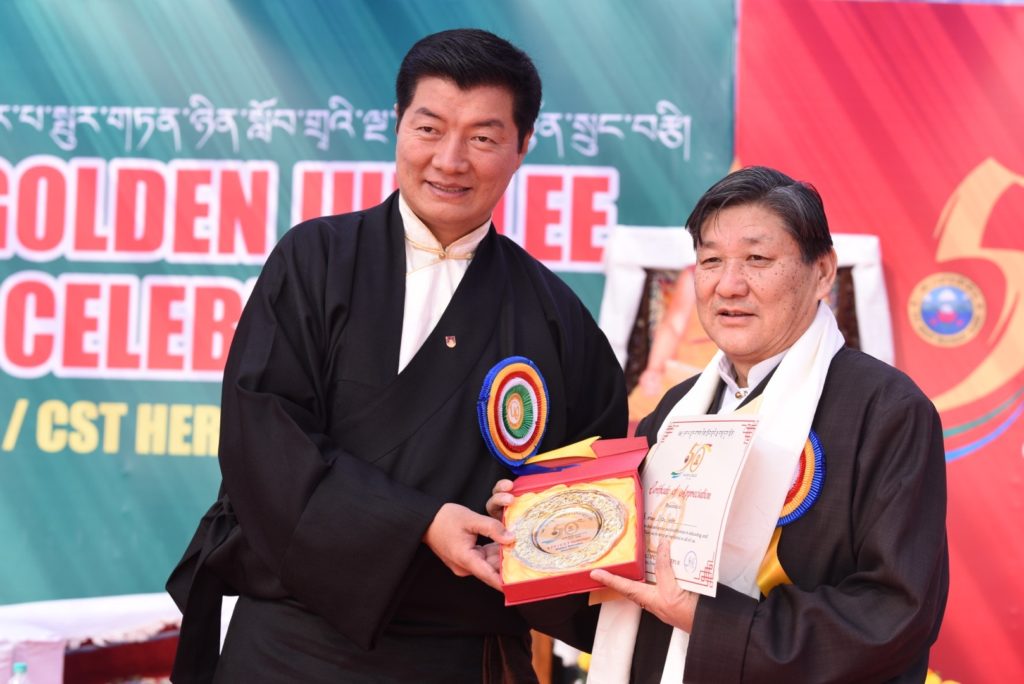 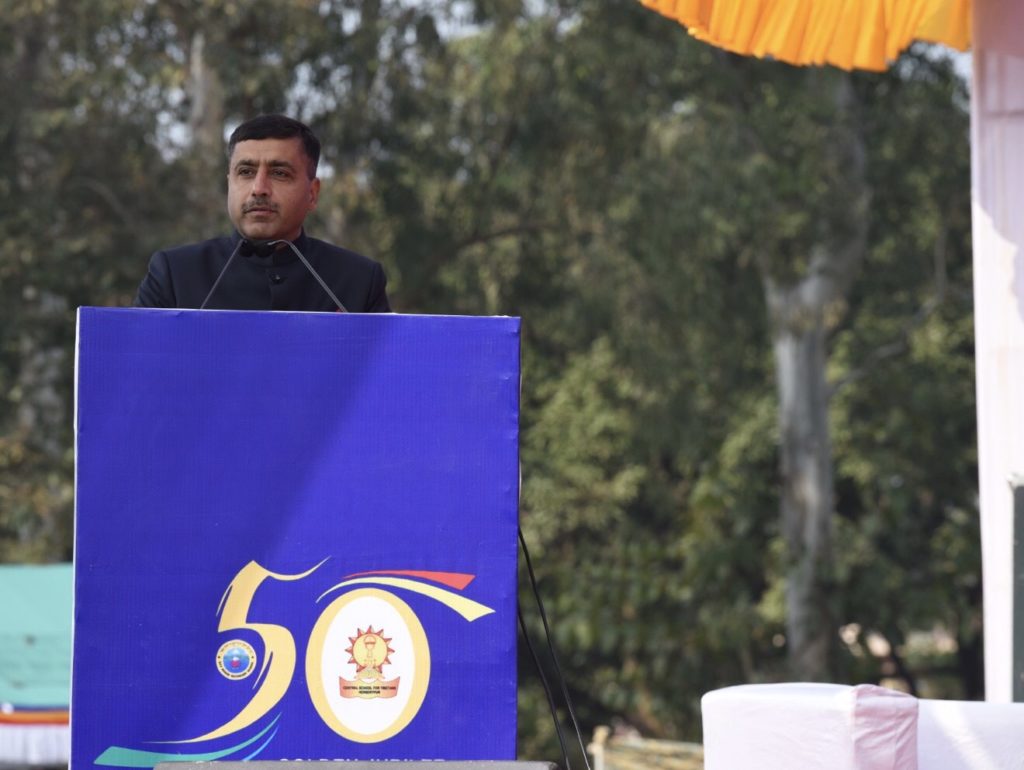 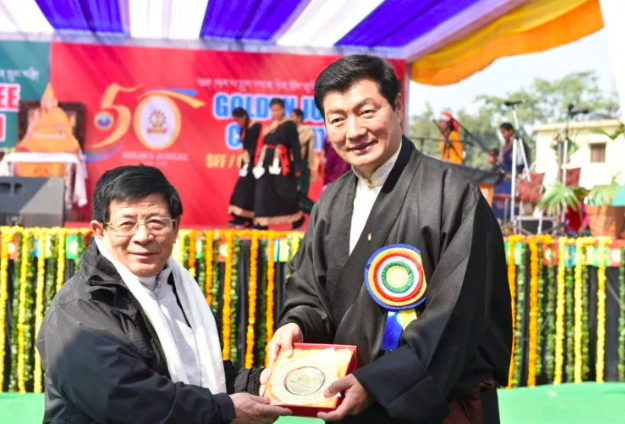 Sikyong felicitates a former staff of the school. Photo/Tenzin Phende/CTA 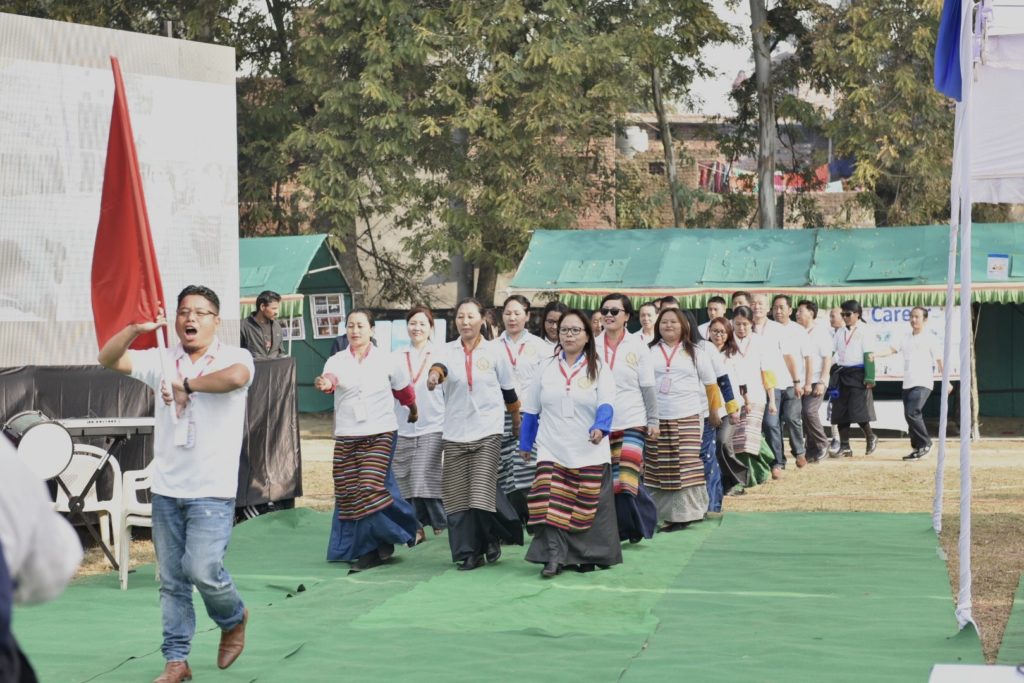 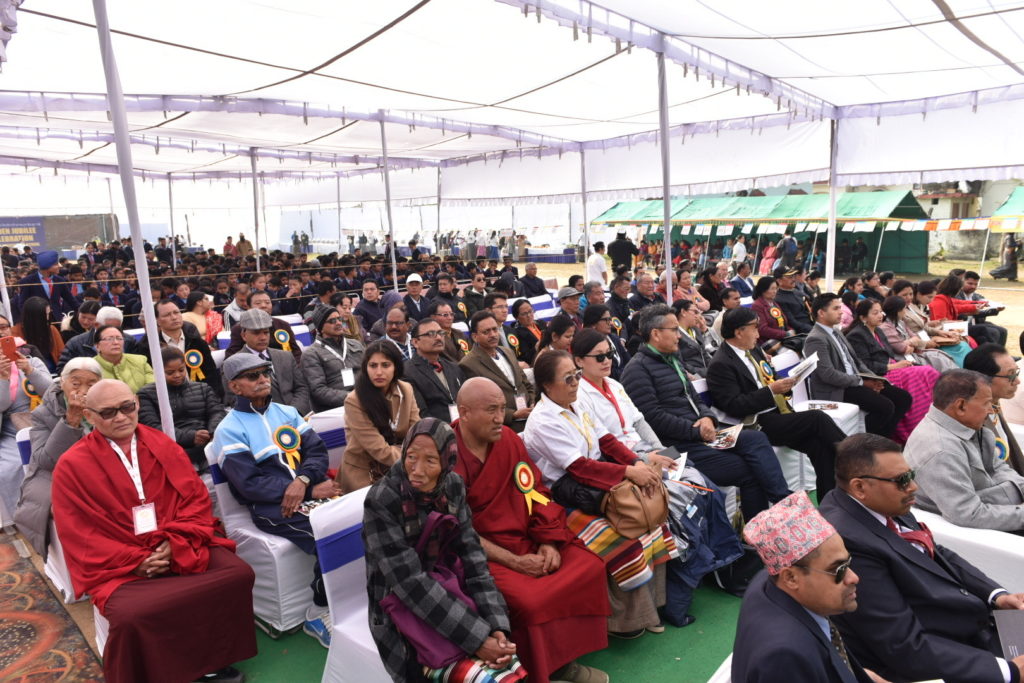 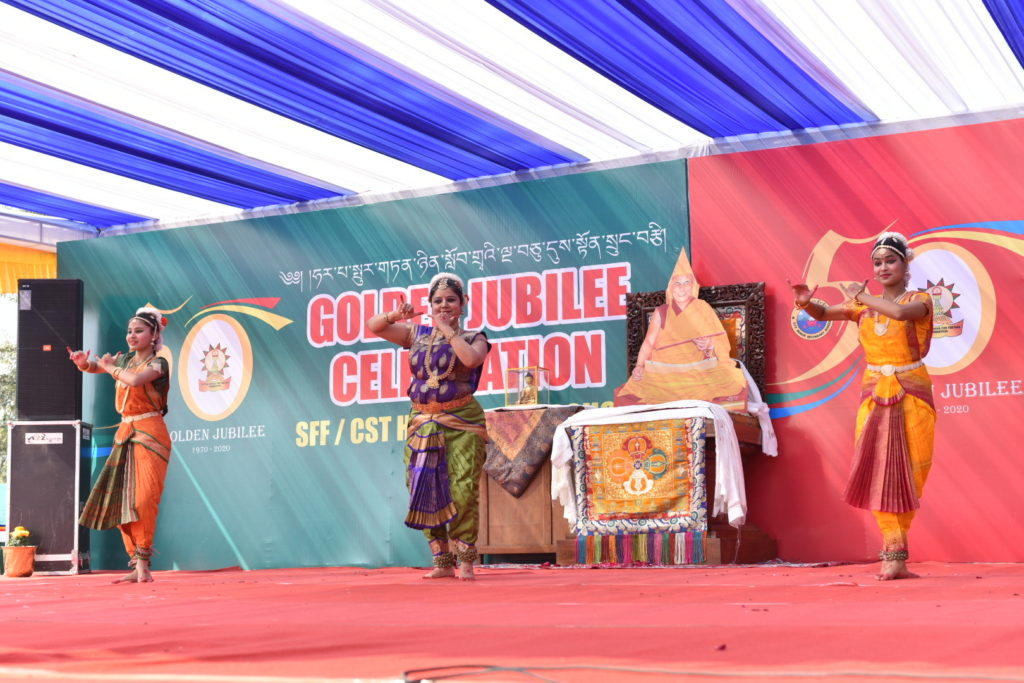