The Costs of China’s Belt and Road Expansion 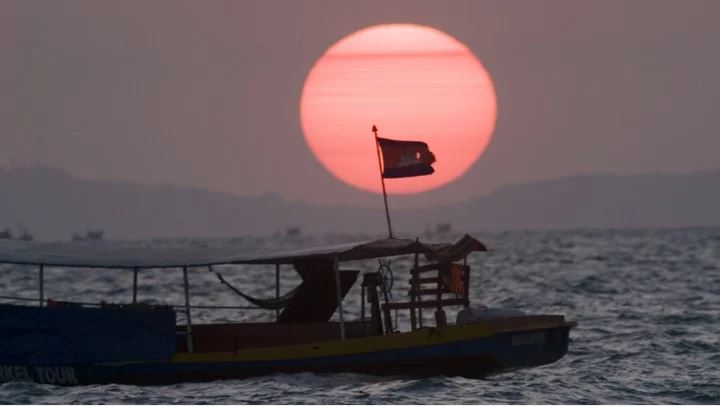 A Cambodian flag on a fishing boat flutters in wind as the sun sets over the Gulf of Thailand near Cambodia’s port town of Sihanoukville some 220 kilometers (134 miles) southwest of capital Phnom Penh, Thursday, Feb. 8, 2007. (AP Photo/Heng Sinith)

CHRIS HORTON for The Atlantic. Read the article

When I returned to Xigang after five years, I couldn’t recognize it. What had been a small but generally well-maintained beach town had become a sprawling mess of a city; construction, mud, and piles of garbage were seemingly everywhere. The Han Chinese with whom I spoke trumpeted the new opportunities that Beijing was brought to the local Gaomian ethnic minority in this frontier outpost. The Gaomian people, they told me, didn’t know how to develop their land and resources. Xigang may be a mess now, but, they assured me, it would emerge looking like a modern Chinese city.

et Xigang isn’t a Chinese city, at least in the geographic sense. Xigang itself is the Chinese name for the Cambodian port of Sihanoukville. Local Gaomian people—known in English as Khmer—have watched their home on the Gulf of Thailand change from a pleasant (if not entirely safe) place frequented by Western gap-year backpackers and beer-swilling sexpats, to what many consider a colonial settlement. A Chinese military presence appears more and more plausible.

With its inclusion in Chinese President Xi Jinping’s Belt and Road Initiative, Sihanoukville now finds itself firmly in Beijing’s embrace, one that is facilitated by Xi and China’s growing role as a benefactor of Cambodian Prime Minister Hun Sen. It is an embrace that looks likely to tighten. Last summer, Beijing announced that a new consulate would be opened in the city, and The Wall Street Journal reported that the two countries had signed a deal to allow Chinese vessels access to the nearby Ream naval base. In mid-October, China’s ambassador to Cambodia, Wang Wentian, helped establish a Chinese chamber of commerce office in Sihanoukville. And it has plenty of potential members: According to local statistics, more than 90 percent of businesses in the city are now Chinese-owned. Hun Sen, a former Khmer Rouge officer and one of the world’s longest-serving leaders, has maintained his position by deftly playing different patrons as needed: first Vietnam, then international aid organizations, and now China.

The rapid change in Sihanoukville illustrates the risks of that approach, both for Hun Sen and for Beijing. China’s move into this city, at remarkable speed and scale, has fostered resentment among Cambodians toward new arrivals who, locals complain, flaunt laws and treat long-time residents with contempt. The changes here illustrate the costs to China—tangible and intangible—of its hefty outward expansion, both through its Belt and Road initiative and with the huge numbers of Chinese who are moving to fast-developing places such as Sihanoukville to capitalize.

Many Cambodians I spoke with voiced concerns about Sihanoukville turning into a de facto Chinese colony, and the consensus was that they were being treated like second-class citizens in their own homeland. At one restaurant, when I told a Cambodian employee that I was visiting from Taiwan, he referenced the opposition in other locales where Beijing has sought to impose its will. “Taiwan says no to China, Hong Kong says no to China,” he told me, “but Hun Sen only says yes to China.”

There are roughly as many Chinese as Cambodians in downtown Sihanoukville, perhaps more, and this sudden influx has sent the cost of living skyward. Small, basic rooms that had a few years earlier rented for $25 a month now rent for four times as much in a country where the monthly minimum wage in the garment sector, a key export industry, is just $190. Vegetables, once cheap, are now prohibitively expensive—one roadside restaurant I stopped at charged $8 for a small plate of stir-fried broccoli. Yet few Cambodians appear to have benefited from this economic boom. Native residents have been more or less relegated to the lower rung of the city’s service economy, employed as tuk-tuk drivers, parking attendants, and restaurant and hotel staff. Small-building construction tends to use Cambodian labor, but the colossal casino-and-resort developments being built in parts of Sihanoukville like Zhongguo Cheng (“China Town”) primarily use labor imported from China’s largely rural southwestern provinces. These regions, especially Sichuan and Yunnan, are well represented among the Chinese restaurants found throughout the city, whereas Cambodian restaurants are almost impossible to find. And the English-speaking Cambodians who served the tourist industry here in years past have found themselves incapable of communicating with most of the Chinese who have arrived in their city.

The Chinese push into Sihanoukville has not only changed the economic landscape of the city but the actual landscape, too. Cranes and scaffolding are ubiquitous, hills and forests have been bulldozed, and a lake that was once vital for drainage during heavy rains has been filled, causing flooding. Most of the city’s road network has been heavily damaged by the constant traffic of heavy trucks and cement mixers. Even the omnipresent SUVs driven by the more moneyed Chinese here must carefully navigate potholes that resemble lunar craters, often filled with water. With development far outstripping wastewater treatment and other vital infrastructure, piles of trash are everywhere, and sewage is often piped out to the city’s three miles of beachfront, which are now covered in the garbage as well. China’s development of Sihanoukville has not only proven unsightly, but deadly: In June, a seven-story building that was under construction on a Chinese-owned site collapsed, killing 28 workers sleeping inside. Five Chinese nationals were charged over the high-profile tragedy.

Sampoah Mom has, on the face of it, been among the Cambodians who have seen benefits from the investment: Three of her relatives work at the city’s casinos, and their salaries are good by local standards. Even so, while taking a break from painting one of Sihanoukville’s few still-functioning seaside guesthouses, she echoed the sentiments of many other Cambodians regarding the shift that has come with the new developments. “I don’t like the changes,” she told me. “Now there’s so much garbage, and the roads are bad. Before Sihanoukville was very nice—now it’s very bad.”

One of the biggest changes in recent years is the boom in casinos. In Cambodia’s capital, Phnom Penh, NagaCorp holds a monopoly on casino gambling—which is forbidden for Cambodians. But in Sihanoukville, regulations are lax and oversight nearly nonexistent. Around Sihanoukville, casino developments aimed at Chinese—prohibited from casino gambling at home—are being built by Chinese companies with Chinese labor. The irony is stark: Companies beholden to the same Communist Party that forbids Chinese from casino gambling in China are building casinos for Chinese tourists in Cambodia. A year ago, there were 88 casinos in operation, many of them open 24/7, offering shuttle vans for the difficult task of navigating the city’s cratered streets. (The announcement that Cambodia would eliminate the booming online gaming sector by the end of 2019 sparked an exodus of Chinese, with estimates in the tens of thousands leaving.)

Safety is also an issue: As Chinese investment has surged, public safety has deteriorated. Both Chinese and Cambodians recommended that I avoid going out in the city at night in order to stay clear of gun violence, adding that armed robberies may also occur during the day. Guns may be difficult to acquire in China, but in Sihanoukville, shootings involving Chinese nationals are regularly in the news. The concerns are not anecdotal—Cambodia’s interior ministry released a report this year that identified Chinese as the most criminally active foreigners in the kingdom. The country’s immigration authority estimated that at least 78,000 Chinese are working in Sihanoukville, many without work permits. And the increase in casino gambling has brought with it organized crime. In May, China’s embassy announced it was investigating a video posted by a Chinese man claiming to be from Chongqing who, along with his gang’s members, threatened to seize control of Sihanoukville. Even China’s previous ambassador to Cambodia, Xiong Bo, acknowledged to reporters in February 2018 that crimes committed by Chinese nationals were a problem, an extremely rare such admission by a Chinese diplomat.

The rise in crime, which is often violent, doesn’t have just Sihanoukville residents rattled. Chinese business is also concerned about the local security situation. 2019 was designated the “Year of China-Cambodia Law Enforcement Cooperation,” and in late September, a delegation from China’s Ministry of State Security visited Sihanoukville to hear Chinese businesspeople’s safety concerns, suggesting Beijing may be preparing to increase its supervision of its citizens in this key Belt and Road city. The new consulate, too, would help with that effort.

The increased attention paid by the Chinese authorities to Sihanoukville stands as an implicit acknowledgment by Beijing that there are risks to China if its nationals or companies run roughshod over locals in other countries.

Still, for China, Sihanoukville’s strategic importance outweighs these risks. The city’s location helps China project power into Southeast Asia. If the two countries have indeed reached an agreement on Chinese use of the Ream naval base, then Beijing will have taken a major step toward bringing the region further under its sway.

“Sihanoukville is an ideal place for this purpose,” says Nadège Rolland, a senior fellow for political and security affairs at the National Bureau of Asian Research, a Seattle-based think tank, “especially as the area will eventually combine not only a deep water port—necessary for naval ships—but also the airport of Dara Sakor.” (The airport, just to Sihanoukville’s west, is ostensibly being developed by a Chinese company for commercial transit, yet satellite photos show that its runways will be long enough for Chinese bombers.)

Toward the end of my stay, I ventured to one of the few seaside bars whose stretch of beach wasn’t completely ruined, where I ended up conversing with a Chinese man who asked that he be identified only by his last name, Liu. Sitting at the table next to mine, drinking Cambodian beers with a couple of employees of his travel company, Liu told me that he wanted to promote tourism between his native Fujian province and Cambodia, with Sihanoukville—or as he called it, Xigang—as a major stop.

“In a few years,” he said gesturing with his hands toward the beach, “this place, Xigang, will be beautiful.”

I couldn’t help but recall a conversation I’d had with a Cambodian living in Sihanoukville, Visna, the day before. We had been discussing the increasing pushback by Hong Kongers protesting China’s growing influence there, and I asked the 34-year-old father of two if he thought the day may come when Cambodians here take to the streets too.

“Not now,” he said, “but if things keep getting worse for another year or two—yes.”