International experts on Tibet and China see the Chinese Boarding School System in today’s Tibet as a replay of similar Residential-School System which was adopted by the white settlers of America, Canada and Australia to wipe out the original culture and identity of local aborigines of these colonized lands.

New Delhi, London, Dharamshala – 5 May: An international group of China watchers and Tibet experts have called upon the world community and world governments to take serious note of and challenge the Chinese government over its latest campaign through a chain of residential Boarding Schools System where all types of communist and colonial tools are being used to brainwash and ‘de-Tibetanize’ an entire generation of Tibetan people. Holding President Xi Jinping and his Communist Party of China (CCP) administrators of Tibet responsible for this new campaign, the experts see a modern replica of similar residential school system at work which was adopted by the white settlers of America, Canada and Australia to wipe out the original culture and identity of local aborigines of these colonized lands.

The experts were participating in an international webinar on “China Using Education as the Last Tool of Colonizing Tibetan Minds” which was organized jointly by the Centre for Himalayan Asia Studies and Engagement (CHASE) of New Delhi and Tibetan Youth Congress (TYC), Dharamshala. The expert who participated were Ms. Eleanor Byrne-Rosengren from UK, the co-founder of ‘Tibet Solidarity’, John Jones of ‘Free Tibet’ in UK and Karma Tenzin, Research Fellow (Education) at the Tibet Policy Institute (TPI) of Dharamshala. Vijay Kranti a veteran Tibetologist, China watcher and Chairman of CHASE moderated the webinar. Prof. Aayushi Ketkar of Special Centre for National Security Studies at JNU, New Delhi coordinated the question-answer session. Co-host Sonam Tsering, the General Secretary of TYC presented vote of thanks.

Karma Tenzin of TPI, a leading think tank of the Tibetan Diaspora, is engaged in research focused at the current state of education and education policies of CCP inside Chinese occupied Tibet; the strategies adopted by China for brainwashing Tibetan children and youths through education; and the impact of these policies on the Tibetan people. Challenging Chinese government’s oft repeated claims that the education levels among Tibetan were very poor before Tibet’s ‘liberation’ in 1951, Karma said that hundreds of well-organized monastic schools used to produce thousands of high ranking scholars every year. He pointed out that during the ‘Cultural Revolution’ decade Chairman Mao almost completely destroyed the education system of China as well as Tibet. But in later years education system was rehabilitated in China but it is still being used as a tool of colonizing the Tibetan minds through eliminating education of Tibetan language, imposing Chinese language as medium of instruction and education on Tibetan students, and teaching a completely wrong and biased history to make Tibetan children feel inferior to their Chinese masters.

“After failing to tame the Tibetan people despite over seven decades of ruthless colonial rule over Tibet, the present Chinese regime under the leadership of President Xi Jinping has started using the education system to produce new brainwashed generations of Tibetans who would not know anything about their Tibetan identity but would be well versed with the virtues of Communism and its leaders like Mao and Xi Jinping,” added Karma Tenzin.

Eleanor extensively referred to the latest findings of a major study report “China’s Vast System of Colonial Boarding Schools Inside Tibet” which was the result of an extensive study of present day education system inside China ruled Tibet. The report, released in December 2021, was compiled by the Tibet Action Institute (TAI) through various individual studies, resources inside the Tibetan and Chinese system as well as official documents of various Chinese government organs dealing with Tibet. This report revealed that more than 86,000 Tibetan children who account for nearly 78 percent of Tibetan population in the 16-18 year age group have been forced to join such Chinese boarding schools where they are completely cut off from their families and social network. “These colonial boarding schools of China in Tibet are modern replicas of similar residential school system which was adopted by the white settlers of America, Canada and Australia to wipe out the original culture and identity of local aborigine communities,” she said. In many such schools, Tibetan children of even pre-school age are admitted after practically snatching them away from their parents through various ways of coercion, she added.

She counted three main factors which make this Boarding School system of China in Tibet today too dehumanizing to be acceptable in the present day civilized and democratic world. “First is that this system leaves no choice with Tibetan parents or the children to decide about their education. Second is that these schools and their curriculum is designed especially to erase the cultural identity of the children in order to assimilate and absorb them into the vast Han and communist identity. And third is the forced separation of children from their families and original socio-cultural environment. Once the child is admitted in such a school then the life is like in a lock-up where even parents are not allowed to enter and meet the children in a normal manner,” said Eleanor.

John Jones describes the current education system of China in Tibet, especially its new chain of Boarding Schools across Tibet, as a ‘symbol of disease of an occupying force’. “After having failed to win the hearts of their Tibetan subject even after seven decades of colonial rule, the Chinese masters of Tibet cannot cope with the fact that such Tibetan youths who have never seen or heard of Dalai Lama or of a free Tibet in their lifetime, are in the forefront of demonstrations and self-immolations against the Chinese rule over Tibet. This Boarding School system is there to cut off the new generations of Tibetans from their social and cultural roots so that they can’t even think of being a demonstrator,” he said.

“The CCP first closes down the local schools of Tibetans and then parents are coerced to send their children to the CCP’s Boarding Schools. Once these children join such schools then they are not allowed to escape. They are not even allowed to go to the local temple or participate in a Tibetan festival. These schools have been established to ‘reprogram’ the Children’s minds to ensure that Tibetan demonstrations like what happened in 2008 across Tibet cannot happen again,” John said.

“This coercion and snatching away their children is leading to serious psychological problems among Tibetan community. For students too, living in a closed Chinese environment, deprivation of their family and social environment and, in some cases, sexual exploitation is causing trauma and severely affecting the mental health of children too,” he added.

In his concluding remarks as the moderator of the discussion Vijay Kranti said that new idea of forced education of Tibetan children through the new chain of Chinese Boarding Schools across Tibet is a clear admission of President Xi Jinping and his CCP colleagues that their policies in Tibet have failed to win the endorsement of Tibetan people to their colonial rule over Tibet which they claim as ‘liberation’ of Tibet. While such schools reflect the desperation of President Xi and the CCP, it is also a proof of undying spirit of the Tibetan people and their longing for a free and independent Tibet.

In his vote of thanks Sonam Tsering said that the draconian policies of CCP rulers in Tibet have severely affected the scope of expressing public voice by Tibetan people against the Chinese colonial rule over them. There current education policy is aimed at brainwashing the younger generation. But he assured the audience that neither President Xi not his CCP will succeed in breaking the Tibetan spirit. He said that the Tibetan Youth Congress remains committed to its goal of achieving complete freedom for whole of Tibet. 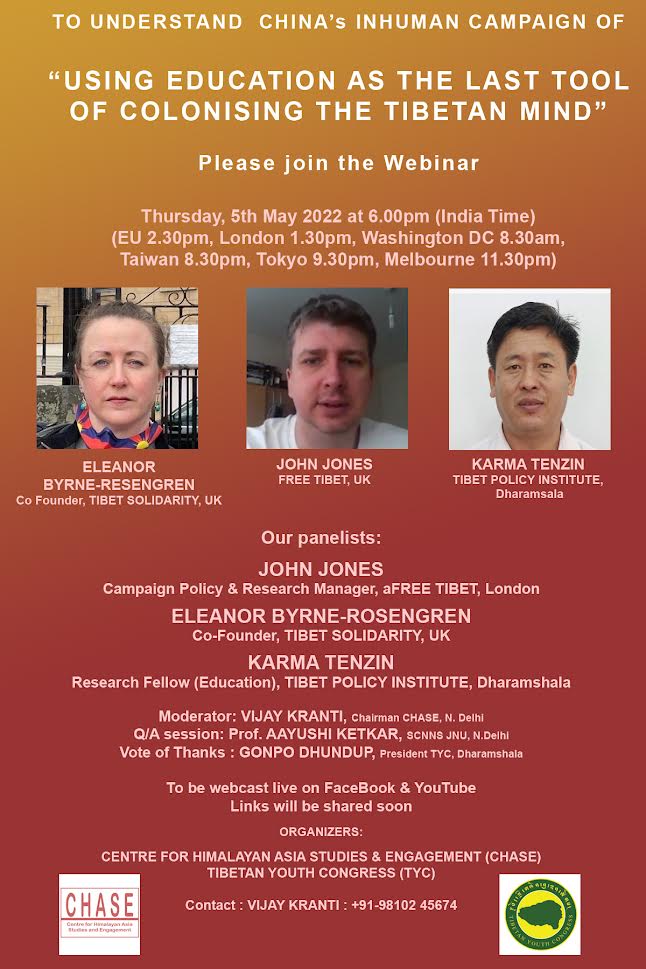