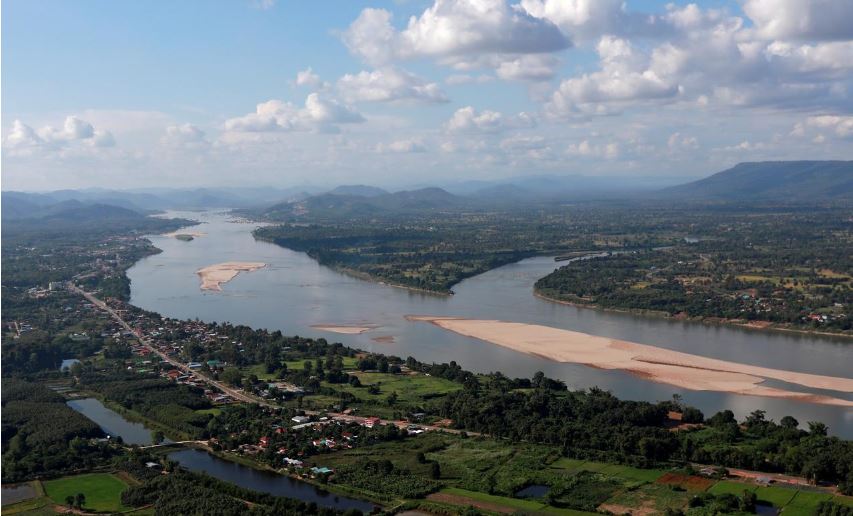 BANGKOK (Reuters) – The Mekong River has become a new front in U.S.-China rivalry, environmentalists and officials say, with Beijing overtaking Washington in both spending and influence over downstream countries at the mercy of its control of the river’s waters.

It’s a confrontation in which the Trump administration – which has largely maintained funding for an Obama-era environmental and development programmes in the Lower Mekong – is losing ground.

The two powers’ struggle recently moved into the realm of science – with the U.S. and Chinese governments each touting different reports about whether China’s 11 dams on the river were harming nations downstream.

China’s dams have given it extensive control of the waters that flow down to Laos, Myanmar, Thailand, Cambodia and Vietnam, which have long depended on the river for agriculture, fisheries, and increasingly for hydropower in Laos.

That control enables China to set the agenda for development linked to the waterway, and to exclude the United States from a role after decades of promoting Mekong projects as a way to exert its influence in the region.

“This is becoming a geopolitical issue, much like the South China Sea, between the United States and China,” said Witoon Permpongsacharoen of the group Mekong Energy and Ecology Network.

The state of the Mekong is an urgent worry for the 60 million people who depend on it for farming and fishing as it flows from China, where it is known as the Lancang, through Southeast Asia before emptying into the sea from Vietnam’s delta.

A U.S. ambassador in the region described China as “hoarding” water in its 11 dams on its upper portion of the 4,350-km (2,700-mile) river, harming the livelihoods of millions of people in downstream countries.

China also has been stepping up activities of its Lancang Mekong Cooperation group (LMC), a relatively new intergovernmental body that a second U.S. ambassador decried as trying to “sideline” the 25-year-old Mekong River Commission (MRC).

The MRC traces its origins back to U.S. efforts to promote development during the Cold War. It works with the governments of Laos, Thailand, Cambodia and Vietnam to foster the sharing and sustainable development of the river and its resources.

China’s foreign ministry told Reuters any U.S. suggestion that Beijing was trying to take over the Mekong conversation was groundless.

“Countries outside the region should refrain from stirring up trouble out of nothing,” the ministry said.

The U.S.-China rivalry broke into a war of words after a Washington-funded study in April concluded that China’s dams held back waters during last year’s drought.

The study by Eyes on Earth, a U.S.-based research and consulting company specialising in water, built a prediction model based on satellite imaging and MRC data that it said showed “missing” waters downstream, starting in around 2010.

U.S. Ambassador to Cambodia Patrick Murphy said he was “quite surprised” at the stark findings.

“That was the same here in the region,” Murphy told Reuters, referring to the reaction to the revelation.

“To learn that a primary source for the diminished level of the Mekong, and changes in the Mekong in the Lower Mekong region, is what’s happening upstream in China – with essentially the hoarding of water,” Murphy said.

China reacted with outrage, with its embassy in Thailand denouncing the study as “politically motivated, aimed at targeting China with ill intent” – a charge its author and U.S. officials denied.

Then, last week, China’s Global Times published an article about a Chinese study it characterized as disproving the Eyes on Earth report.

“River dams in China helped alleviate drought along Lancang-Mekong, research finds,” read the headline in the newspaper published by the People’s Daily, the official newspaper of China’s ruling Communist Party.

However, the study by Tsinghua University and the China Institute of Water Resources in fact said China’s dams could, in future, help alleviate drought, not that they actually did so in 2019, according to a copy obtained by Reuters.

“We are not meaning to compare with any other report. We aim to provide some basic facts to facilitate mutual understanding, trust and therefore cooperation in the basin,” lead researcher Tian Fuqiang told Reuters in an email.

Researchers will argue about the science, but for the Lower Mekong countries, it comes down to trust and power.

“They rely on China now for a life-giving resource, and it’s very difficult for them to openly challenge the Chinese government on its dam building,” Strangio said.

Reluctant to take sides, none of the MRC countries has commented publicly in favour of either the Chinese or American study.

The United States has spent $120 million on its Lower Mekong Initiative since it was founded 11 years ago.

China appears to be spending more: in 2016, the Beijing-sponsored LMC set up a $300 million fund for research grants to be awarded for the five downstream countries.

The LMC did not respond to requests for an interview nor to questions about its 95 proposed projects, planned or underway, that are on a list reviewed by Reuters from its first Ministerial Meeting in Beijing in December.

The Chinese-led group is taking a higher profile with an annual foreign ministers’ meeting and plans for a summit of leaders, possibly including Chinese President Xi Jinping, while less heavy-hitting water and environment officials typically go to MRC meetings, a Thai government official said.

The LMC drew criticism from the U.S. ambassador to Thailand, Michael DeSombre, who called it a “parallel organisation” to the MRC.

“We really would encourage the People’s Republic of China to work together with the Mekong River Commission, rather than trying to sideline it by creating its own organisation that it controls,” DeSombre said.

Despite the U.S. warnings, officials at the Mekong River Commission say it welcomes cooperation with the LMC and China.

One reason is that the commission and member governments want more data about operations of China’s dams, which hold back a combined capacity 47 billion cubic metres of water.

In 2002, Beijing started notifying downstream countries of when it would release water that could cause flooding.

But China has disclosed little else to enable downstream countries to make plans and request adjustments in the river’s flows.

China, at a February meeting of the LMC, promised more cooperation with its neighbours, but when speaking privately, regional officials are sceptical.

“China hasn’t shared any constructive data,” said a Vietnamese official who declined to be identified.