Bangalore: Chief Representative of South Zone, CTA, Mr Chophel Thupten, led a delegation from Namdroling Monastery, Sera Lachi, Sera Jey & Sera Mey Monasteries from Bylakuppe, accompanied by Settlement Officer as well as Khenpo of Dzongkar Choede Monastery, Administrator of Gyudmey Tantric monastery and Settlement Officer; Kollegal Tibetan settlement Officer & President of Tibetan Freedom Movement to meet with Hon’ble Chief Minister of Karnataka B.S. Yediyurappa and express the solidarity and support of the Tibetan community with the people and government of Karnataka at this difficult time. As a token of their contribution to the Govt. efforts in fending off the coronavirus threat and rebuild lives, the Tibetan delegation handed over a cheque worth over 70 lakhs to both PM Care and Chief Minister Relief fund.

Amidst this exceptionally difficult time, the Tibetan community of Karnataka, mainly from various Buddhist monasteries in the state, have expressed their solidarity with the people and government of India and Karnataka, contributing over Rs. 2 Crores to the Prime Minister’s Citizen Assistance and Relief in Emergency Situations (PM CARES) fund and Karnataka Chief Minister Relief Fund to fight the COVID-19 outbreak.

The Tibetans residing in the five Tibetan settlements in Karnataka have also undertaken various relief measures, providing food and dry rations to the poor and the vulnerable communities, including labourers and daily wage earners. 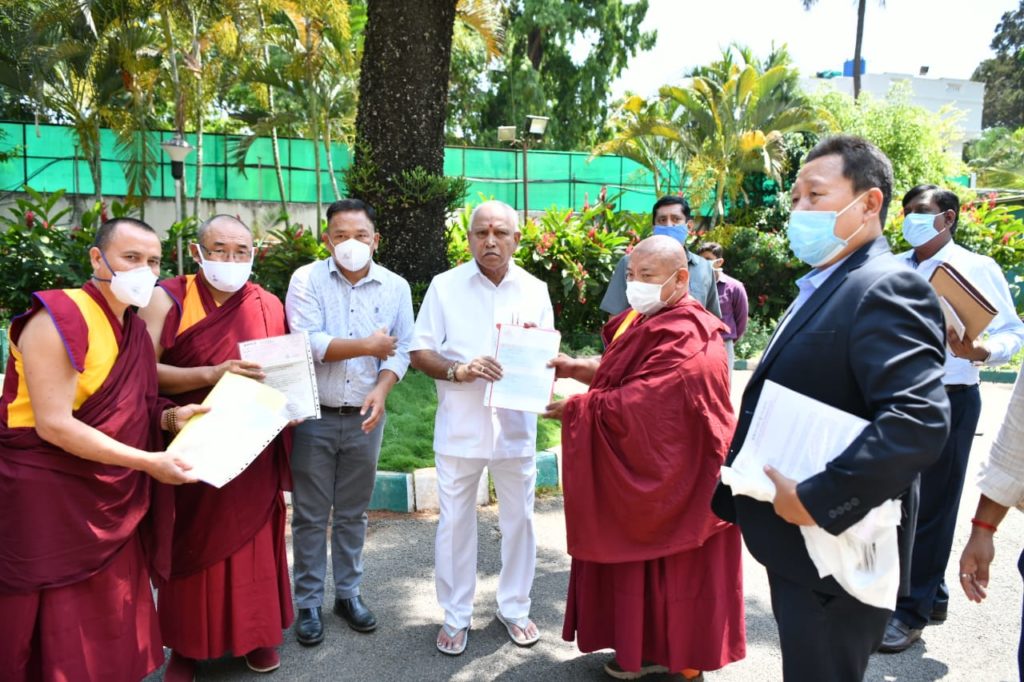 Delegation from Sera Lachi, Sera Jey, Sera Mey Monasteries and Lugsam TSO with Chief Minister B.S. Yediyurappa as they hand over the cheque.

“As a result of the much-needed lockdown in the country, many people, especially those who are solely depended on their daily wages, are facing tremendous hardships. Hence, we, Tibetans, believe it is our utmost duty to help them in this difficult time while doing our very best to support the central and Karnataka state government’s untiring efforts to combat the COVID-19 outbreak,” said Mr Chophel Thupten, Chief Representative of Tibetans residing in the South Zone, Central Tibetan Administration (CTA).

Therefore, the Tibetan community residing in Karnataka state which includes the five Tibetan settlements of Bylakuppe (New and Old), Hunsur, Mundgod, and Kollegal, as well as Tibetans living in Bangalore have collectively raised a total of Rs. 203,65,228.00 (Two crores, three lakh, sixty five thousand two hundred and twenty eight) as contributions to the PM CARES and Karnataka CM Relief Fund and relief measures. 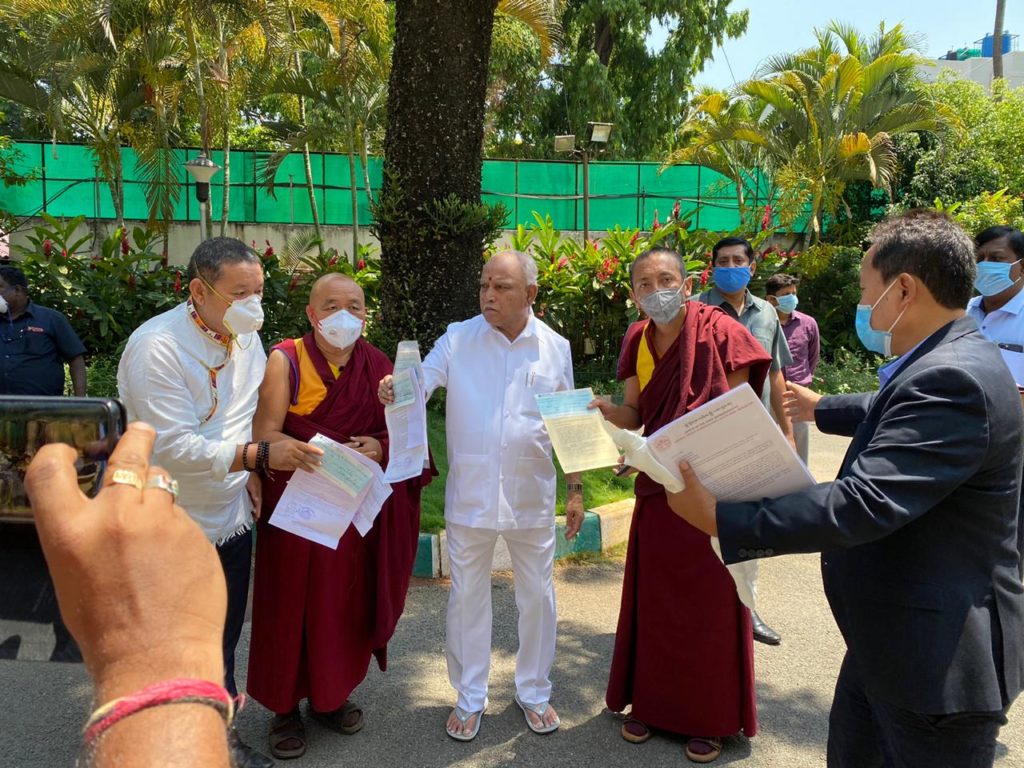 Tibetans in Karnataka also undertook various relief measures for daily wage earners and poor locals living and working in and around the Tibetan settlements. Many of these relief measures were carried out in coordination with local Indian officials and were highly appreciated by the casual labourers, daily wage workers and the poor who received aid.

Tibetans around the country have also been doing their bit to support the state and central governments’ efforts to fight the COVID-19 spread and aid the poor. Earlier this month, all of the Central Tibetan Administration staff pledged to donate their one day’s salary to the PM CARES fund. 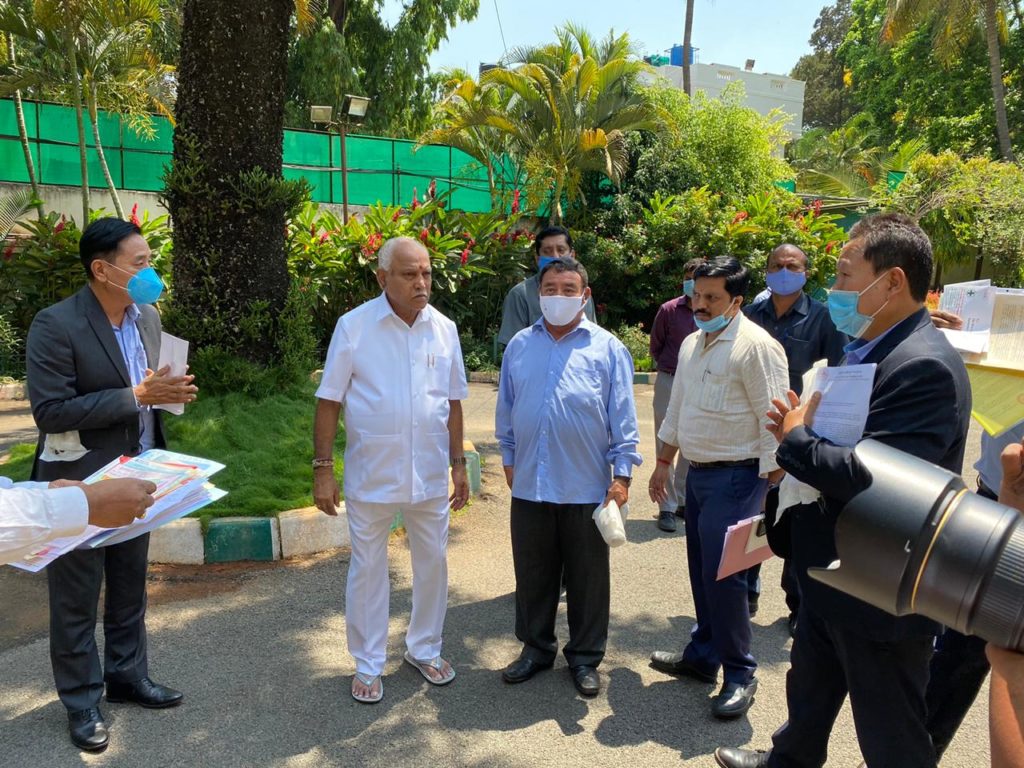 Mr. Thupten expressed to Chief Minister that: “Tibetans have come forward to express their admiration and gratitude to the people and government of India and Karnataka, as well as governments around the world, for their untiring efforts to combat the Covid-19 pandemic amidst many challenges. At the same time, we also salute and are indebted to the medical staff, doctors, nurses, police personnel, and others who are working on the frontlines to save the lives of others at great personal risk. Finally, we wish and hope for an early end to this pandemic so that normal life may soon be restored.”