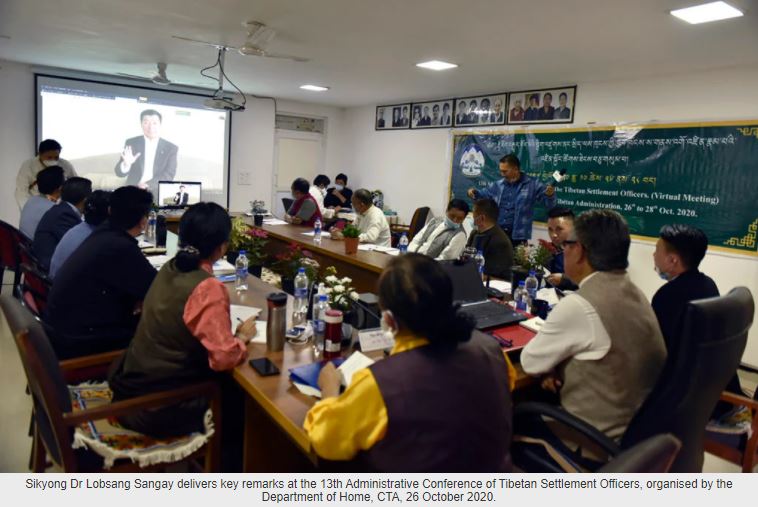 Dharamshala: Sikyong Dr Lobsang Sangay delivered the keynote address at the 13th conference of Tibetan Settlement Officers organised via teleconference by the Department of Home ealier on Monday.

Highlighting the global-scale disruption caused by the Wuhan-originated pandemic to social, political and economic activities, Sikyong said, “it is imperative not to forget that even this meeting, an annual event held in Dharamshala for days of impactful discussions and interactions, had to move virtual due to the gross mismanagement by the Chinese government of a pandemic that could have been prevented.”

He cited the PEW Research published recently that showed that China’s global image suffered severely due to mishandling of the pandemic.

“In the last 2-3 years, global trust deficit towards China has drastically increased. This research survey of 14 democratic countries led by Europe, Japan, New Zealand, USA and more show that trust deficit with China has hit its highest, with Japan and Sweden going up to 86% and 85%. It is a dramatic shift,” he notes.

Dr Sangay stressed that until China is accounted, its gross mishandling of the pandemic aggravated by repressive government policies should be foregrounded at all times.

“There is a global attitudinal shift towards China, presenting a window of opportunity for the just voice of Tibetans to prevail.”

On the historic appointment of the Special Coordinator for Tibet issues and his formal visit to the State Department, Sikyong said, “It is the first time in history that a Special Coordinator for Tibet issues has been appointed and the head of the CTA was invited to the State Department. This signifies a formal recognition of Central Tibetan Administration and the leadership of Sikyong,”, adding that the landmark event is the culmination of 9 years of consistent efforts beginning in 2011.

The Tibet Support Policy Act is similarly expected to pass the Senate in near future. “We will be working to push the bill for passage into law in the two months of the Senate session,” he said.

He also hailed the direct funding from PRM as another landmark achievement that recognizes CTA’s leadership. In his recent visit to Washington DC, the President had also met with the head of PRM and USAID over very productive meetings.

Sikyong also took a moment to applaud the efficient leadership of the Settlement officers and Chief Representatives in managing the COVID situation in Tibetan communities.

Lauding the SOs and CROs who are in charge of implementing the guidelines across settlements, he encouraged sustained efforts as vaccines are to become available by year end.

Taking note of mental health issues worsened by the pandemic across the world and in the community, Dr Sangay proposed an alternative rehabilitation centre that could integrate a wide range of approaches including Tibetan herbal tradition, meditation and Buddhist teaching added to Western medicine system.

He added that Settlement Officers should pay more attention, especially contemplate measures to support them and tackle mental health issues.

Speaking on the destitute support programs of CTA, Sikyong said CTA programs that disburse crores of rupees in funds to support the needy individuals and families over a lifetime could not simply compare to individual contributions.

In addition, he asked the public to restrain from publicizing such activities in the greater interest of the Tibetan cause, as such materials could play into the hands of the Chinese government into discrediting the CTA.

On the rehabilitation project underway for those living in cluster settlements, Sikyong said that CTA would distribute housing and support the costs of renovating houses upto few lakhs and shall also set strict criteria to discourage false claims.

The 13th conference of the settlement officers will conclude on 28 October.